April  12, 2021 – Today, REFORM Alliance announced a legislative victory in Virginia in collaboration with partners Justice Forward VA, American Conservative Union and Faith and Freedom. With the enactment of HB 2038, the state’s probation population will be reduced significantly, recidivism curbed, wasteful spending decreased, and supervision will become more effective and efficient, all while increasing community safety and workforce stability.  This victory comes on the heels of REFORM’s previous legislative wins in Michigan, Louisiana and California that help to transform the parole and probation systems in those states.

The new law in Virginia – which takes effect on July 1, 2021 – will implement caps on probation terms by limiting adult probation sentences to a maximum of one year for misdemeanor offenses and five years for felonies. Prior to passing HB 2038, Virginia was one of only seven states with no such restrictions, resulting in endless extensions to probation terms that kept people unjustly trapped in the criminal justice system.

Additionally, HB 2038 will provide much-needed relief to the catastrophic consequences people on probation face as a result of technical violations (non-crimes like missing a meeting with a probation officer, failing to report a traffic ticket to the probation officer, etc. that can result in lengthy incarceration).  HB2038 creates a system of graduated sanctions for technical probation violations to prevent people from being re-incarcerated for a first technical probation violation. If there are subsequent technical violations, a term of incarceration can only be imposed if the court finds that there is no other safe and less-restrictive way to deter the conduct.  This refocuses Virginia’s limited resources on public safety, community stability, and successful reentry, rather than investing in incarceration to punish people on probation for non-criminal conduct.

“This legislation is a meaningful step forward toward building better pathways for Virginians stuck in the probation trap, and sets a positive example for what can be done in other states across the country,” REFORM CEO Robert Rooks said. “We’re thankful for the support behind HB 2038 that will reunite families, prevent unnecessary incarcerations and give life back to thousands of Virginians.”

The REFORM collaboration in Virginia originated when Justice Forward VA and the bill’s author Delegate Don Scott, who is also system impacted,  tweeted at REFORM founding partner Meek Mill in December 2020, asking for support on Scott’s criminal justice bill. Meek publicly agreed to assist and dispatched the REFORM team to partner with Scott – who joined forces with the advocacy groups – to collectively drive the bill forward. 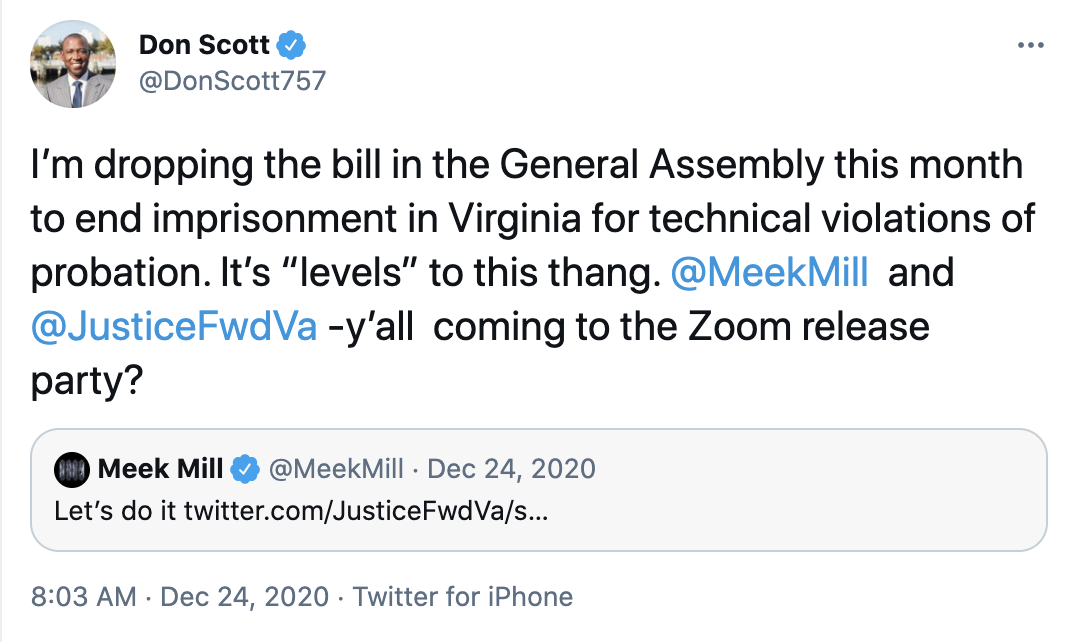 “When people directly impacted by probation and our broken criminal justice system, like Meek Mill and others at the REFORM Alliance, get behind those of us fighting to make a difference on these issues, we can create substantive and meaningful change,” said Delegate Don Scott.

HB 2038 signals a new era for Virginia – as one of only a handful of states without limitations on supervision, the average length of a probation term has increased by more than 50% since 2000, requiring the nearly 60,000 people on probation in the state to endure lengthy and unjust supervision terms.  On any given day in Virginia, 11,239 people are incarcerated because of a probation violation, generating an annual cost to the state of $309 million.  HB 2038 finally puts a stop to never ending probation terms and brings much-needed limits to the costly and damaging practice of using incarceration to address technical violations, all while increasing safety and stability in local communities.

To harness the growing momentum of REFORM’s state-by-state work to transform the flawed probation and parole system, REFORM has launched a revamped website to improve access to opportunities for the growing community of Reformers.   The site, which was designed and built by award-winning creative digital agency Wide Eye, features newly designed elements that capture the essence of the work REFORM is committed to as well as real stories of people on probation and parole that have experienced the web of contradictory and ineffective rules.  People can sign up to take action with REFORM at https://reformalliance.com/actions/.

REFORM is committed to transforming probation and parole throughout the United States by changing laws, systems, and culture. The organization is working to replace America’s criminal justice system with a restorative approach that is fair, accountable, and invested in rehabilitation. Our goal is for people to reenter society with dignity, create meaningful pathways to work, and equip them with the tools to succeed all while making families and communities safer and stronger.

REFORM CEO Robert Rooks' statement on the violence in Minnesota